My bucket list. What I want to do before it's too late

1. go to speed week at the bonneville salt flats

In the United States, Utah sits sandwiched between Nevada to the West, Colorado to the East, Arizona to the South and Idaho and Wyoming to the North. Situated just under 90 miles West of Salt Lake City, the State's capital, lay the Bonneville Salt Flats which cover an area of around 40 square miles. The first land speed record was set there by Teddy Tetzlaff in 1914 and since then, the
Salt Flats have been a haven for speed freaks the world over. Every year in August the flats host Speed Week, which as the name suggests is a week long festival for drivers and riders who want to push their vehicles and indeed themselves to the limit.

2. ride a bike up the hill at the goodwood festival of speed

1993 will go down in history for many things. Monica Seles was attacked by an obsessed fan. Janet Reno became the first female Attorney General of the United States. Bill Clinton was elected as the 42nd President of the USA and Lord March brought motorsport back to Goodwood in the form of the Festival of Speed. The first event took place on Sunday 13th June and drew a crowd of 25,000 people. Over the years the event has expanded to be one of the most anticipated motorsport events of the year, rivalled only by the F1 and MotoGP championship races. It now lasts four days and draws crowns of 150,000 people.
The core event at the Festival of Speed is the hillclimb, a timed run up 'Lord March's drive' a 1.16 mile narrow strip of tarmac that snakes past Goodwood House up towards the woods at the top of the hill. Nick Heidfeld has held the record for the best time since 1999 when he thrashed a Mclaren MP4/13 up the hill in 41.6 seconds. I first went to the Festival of Speed in 2005 and have gone every year since with the exception of 2008 and 2009 and since passing my bike test I have wanted to ride one of my bikes up the hill feeling the rush as I power under the bridge just after the house.

Nestling within the rocky mountains just West of Colorado Springs sits Pikes Peak. The mountain, although not the highest peak, stands at over 14,000 feet above sea level and according to the website www.pikes-peak.com is the second most visited mountain in the world second only to Mount Fuji in Japan. Between 1886 and 1888 a road to the summit was built and in 1916 people decided to race up  it.
Over the years the surface has changed. Originally just a dirt trail, tarmac sections were added over the years and the times that were acheived dropped every year. As of 2012 the entire route was made tarmac, which corresponded with the first sub 10 minute run along the 12 mile route by a motorcycle, when Carlin Dunne rode a Ducati Multistrada to the summit in 09:52.819. The outright record now stands at 9:46.164 by Ryhs Millen driving is Hyundai Genesis Coupe
http://www.usacracing.com/ppihc

If there is one place that is synominous with motor racing, its Le Mans. 130 miles west of the French Capital, every year Le Mans plays host to numerous different motoring events, but the 24 Heures du Mans (24 hours of Le Mans) is the most famous. The world's oldest endurance race has been run since 1923 and is commonly regarded as the most challenging race for car and driver. Every
summer the event regulary draws crowds of well over 250,000 spectators. There is also a  24 hour race for Motorbikes which has been held annually since 1978 and usually takes place around September.

5. attend the 8hrs at suzuka

Suzuka is the most famous race track in Japan and is located in Mie Prefecture, West of Suzuka City. One of a few number of figure 8 circuits, Suzuka was first built in 1962 and is now owned by Honda. A regular circuit on the F1 calander the circuit also hosts several endurance races, the most famous of which is the Suzuka 8 hours. First run in 1978, the race draws the best riders from around the world where they compete in teams of two or three. Previous winners have included Valentino Rossi, Colin Edwards, Alex Barros, Wayne Gardener, Mick Doohan, Scott Russell, Ryuichi Kiyonari, Carlos Checa and in 2012 Johnathan Rea became only the second non Japanese rider to rin the race since 2003.

6. do a trackday at suzuka in japan

I am a big fan of trackdays. I really enjoy pushing myself and the bike nearer to its limits than good sence and preservasion allow on the UK roads. I doubt i'd be able to ride my own bike around the circuit, but can you imagine approaching the 130R, one of the fastest corners in the world on a motorbike. Now you know why I want to do it before its too late

7. ride my ducati to the factory in bologna - complete

To Ducati owners, the factory in Bologna in North East Italy is holy ground. It is the birth place of every bikes built since 1950, including  the WSBK machines of Fogerty, and Checa, the MotoGP bikes of Hayden and Stoner and even the 1098s of a little known English rider called Brown.  Although its a factory, the production line at Bologna is nothing compared to that of the Japanese big four as every bike that comes of the line has been assembled by hand  I mentioned the idea of riding to the factory from the UK to a friend of mine and a fellow Ducati owner and he seemed to like the idea. I'm not too sure of the logistics, but just of the thought of returning my bike back to its 'birth place' just for a photo, is just the kind of foolishness that made me learn to ride in the first place..

I finally rode my bike all the way from the UK in July 2014. I left of the 14th, rode four days across France and into Italy, so after spending a few days at Misano for WDW2014, I rode up to the factory on the Sunday morning.

Every two years, the Bologna brand takes over the Misano circuit, just south of the factory and host a five day party dedicated to all things Ducati. Everything from the current crop of top riders to the new bikes are on full view of their adoring fans. There's music, bikes, more music and even more bikes. Its five days to just celebrate and embrace all the Ducati is, all it was and all it will be. Where did I sign?

I did this the hard way and rode my bike all the way from the UK. 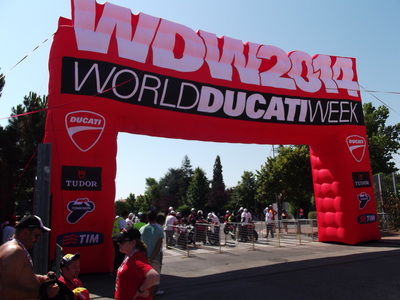 9. get an article published in a uk bike magazine - complete

Its fair to say that I am a huge bike fan, but what made me this way? Was it the bikes, or was it the way that people wrote about them? I first saw the bike of my dreams in a copy of Bike Magazine and subsequently hunted it down at the London Bike show just to see it in the metal. The words brought the machine to life, the pictures giving the bike an almost unnatural beauty. At that time, most of the text didn't really mean a whole lot to me, I just found that I wanted to know more. In a very short space of time I had doubled the number of bike magazines I was reading. Before I knew it I was reading four a month. I even read one in three days from cover to cover. I really just couldn't get enough of what was in front of me. The articles were guiding me towards bikes that interested me, almost nurturing my interest in some, but confirming my disinterest in others. It is amazing the power of the written word. For me, there wouldn't be anything better than forging a career writing about bikes, but before that's possible, I would just like to see something I've written, something I thought about, something I've worried and something I love spread across a few pages in a monthly title, with the words by Matt Brown etched underneath.

After writing an article and pitching it to all the major UK bike magazines, Simon Roots of Fast Bikes told me he'd take it. It took several months to appear in print, but my article with photos regarding the service costs of my 1098s appeared in the July 2014 edition of Fast Bikes magazine.

10. do a trackday at spa in belgium

To give it its full name, the Circuit de Spa-Francorchamps cuts through the Ardennes Forest in East Belgium. Originally nine miles long the circuit has been modified over the years and currently runs for just under four and half miles. Spa is famous and infamous at the same time as being one of the most dangerous circuits in the world. Since first being used in the early twenties,  the circuit has claimed the lives of numerous drivers which led  Jackie Stewart to start a campaign in the seventies to dramatically improve the  safety measures. When people talk of Spa, there is one section of the circuit that automatically springs to mind and that is the Eu Rouge/Raidillon complex and the start of the lap, which is a very fast left, right, left which runs into and out of a valley up a steep incline into a blind summit.

To fans of motorsport, there are certain places in the world that emote feelings of awe, love, intrigue and fear. The Nurburgring is right at the very top most of those lists. Built around the the German village of Nurburg the Nurburgring Nordschleife has been used for motor racing in one form or another since 1927. Today there are two real circuits, the 'new' GP circuit which was opened in 1984 and the original 15 mile plus Nordscheife, which now, although it does still host a few endurance and other races, is pretty much the worlds fastest one way toll road. I say 'toll road' with my tongue firmly in cheek as its one of the few 'toll roads' where your insurance isn't valid. In fact, I don't think any is.  There are certain rules in place to aid safety, but ultimately its a pure pay as you go scheme and you will find yourself sharing the circuit with anything from superbikes and supercars to hot hatch backs and everything in between.

The Isle of Man T.T. For some, you don't have to say anymore than that. The Isle of Man is a self governing island in the Irish sea that sits between Northern Ireland and England where motorcycles and motorcycle racing have been part of the local psyche since man first powered two wheels with an engine. The island hosts several different annual road races including the Southern 100 and the Manx GP, but by far the most famous are the TT races that take place over two weeks in the summer.
Over the years the Tourist Trophy has been incorporated into several larger championships, including the FIM Motorcycle Grand Prix World Championchips and the TT Formula 1 Championship, but today the event stands alone as the worlds premier motorcycle road race event. During the race week, the races are broken down into different classes that range from Superbike, Superstock, Supersport, Lightweight, TTXGP to the Sidecars. Each class race a predetermined number of laps around the 37,739 mile course that snakes around the island and up the famous mountain. I have no desire to compete at the Isle of Man, but those who do are quite possibly the bravest riders to ever straddle a bike. Just to be there, watching from the sidelines, eyes wide with wonder is all I need.
Powered by